On Friday in Morning Talk a group of LGBTQ+ students led by teacher Kirstyn Kedaitis discussed allyship and how we can support those in our community who identify as LGBTQ+.

The talk featured one of our Sixth Form students Jack Hammond talking about his journey and the art work that he has created to represent the feelings of both himself and his peers.

Jack and his peers spoke incredibly powerfully about what allyship is:

An ally is a non-LGBTQ+ person who

Why is allyship important?

They also gave clear examples about what each of us should do:

In short… just be respectful!

Why does it matter?

It matters because your words and actions can directly impact other people, whether you realise it or not.

The Yale School of Public Health study (2019) found that 83% of LGBTQ+ people feel the need to hide their identity, and that increased allyship could drop that number to 16%.

The students concluded by giving information to their peers about where they can find help and support both in school and outside of it, and by agreeing that we need to talk about allyship continuously until our rights are truly equal. 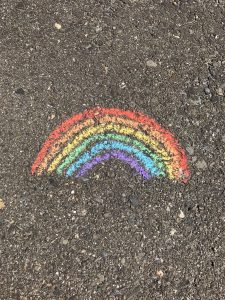