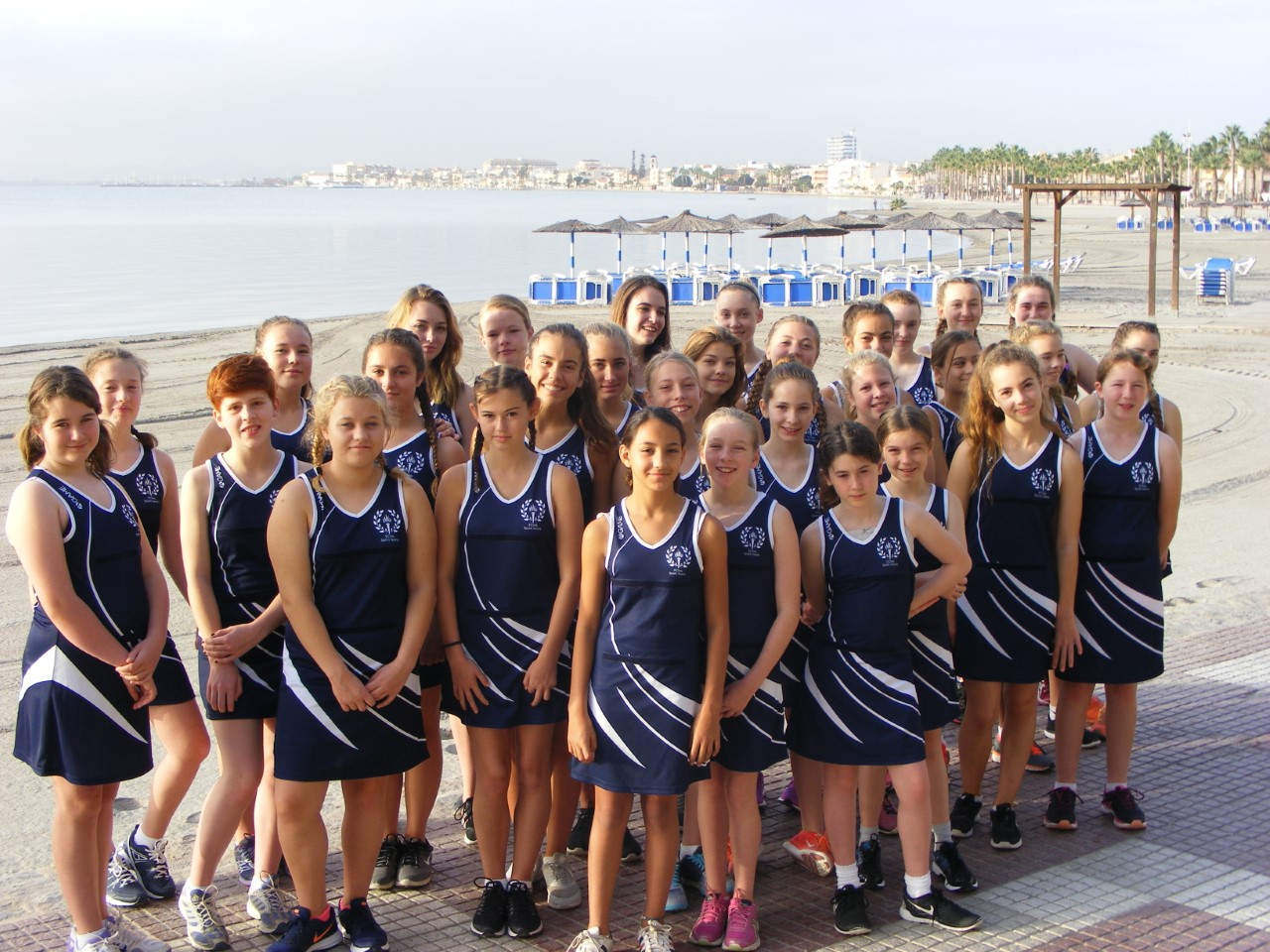 A group of 31 St Chris girls from Years 7 to 13 accompanied by four members of staff took part in the School’s seventh netball tour to the Costa Blanca this October half-term.

After a bleary-eyed start at Luton airport on the Monday morning (3.45 am) the girls arrived to a 26 degree Spanish autumn and took part in their first netball session with the All England Netball Coaches followed by dinghy sailing, windsurfing and Stand-Up-Paddle on the calm waters of the Mar Menor.

The netball coaching was of a high standard and headed up by a former England Netballer, now coach,and covered both attacking and defensive play, focussing on key skills such as turning and pivoting to the direction of play to ensure maximum speed down the court. The coaching was applauded by all our netballers, both the beginners and more advanced players (already experienced in club coaching outside of School).

All our girls improved their level of play whilst on the tour and we also succeeded in finding another Shooter for the Year 7 team…one of our aims! It was also satisfying to see progress in the girls’ fitness, through the fun Strength and Conditioning sessions on the beach as well as the Netball circuit on the astro court.

Teamwork also improved, especially as some of the players needed to play with girls with whom they would not usually compete. This was a credit to our four team captains (Frankie P, Neve, Alex and Frankie W) all of whom were sterling role models to their teammates in terms of effort, application and spirit in both the training sessions and matches.

In the evenings, there was fun to be had at the karaoke and disco and the Netball’s Got Talent Night was also great fun as we celebrated Mimi performing an excellent acapella solo and watching the Video Star compiled by the Year 11 students summarising the fun they had during the week!

On the final tournament day, expectations were high: three of our teams placed in the more experienced “Championship Cup” and our U12 team placed in the younger Challenge Cup. There was great determination from all the players to do their best which lead to several commendable results such as our U12s winning one game 7-0 and our U14 (Yrs 8 – 10)team winning another game 8-1. Our U14 (Yr10) team won three of their games, drawing one and losing only two games to the eventual winners and runners up of the tournament (and one game only by one goal!).

First place came down to the final game and it was such a shame that our U18s were pipped to the post in the last second of that match when the opposition scored a lucky goal to draw with them which, after points and goal difference were calculated, meant that the top spot went to the other school. However, it was evident from the red faces from all that walked off the court that they had fought hard right to the end to earn their Championship Runners Up position and they now relish the thought of taking part in their Senior Tournament and showing off their skills!

It was a fantastic trip, with all the girls proving themselves to be great ambassadors of St Chris. It was commented on by both coaches and hotel staff that our girls were well behaved, energetic and keen to improve and there were awards for Notable Performances by Lola-Rose, Annie, Honor and Bethany while Most Committed players were noted as Mimi, Izzy H, Georgia and Mia. Our Most Improved players were Ellen, Neve, Emma and Lauren with Outstanding Player awards going to Frankie P, Neve, Alex and Ella.

But with all of them saying they had such a wonderful time, and so many of them already talking about coming on the 2018 trip, it was certainly a huge success.