The Book Club trip to the Book Awards at Hitchin Boys’ School may have been called off, but they still wanted to discuss the books they had been reading since the beginning of term – and to vote for their favourites – so we held our own in-house discussion last Tuesday, with all the other participating schools doing the same, so we were all able to submit our votes remotely and contribute to the final result.

When it came to the vote, there was clear consensus:  Sophie Anderson’s ‘The Girls Who Speaks Bear’ and Holly Jackson’s ‘A Good Girl’s Guide to Murder’. Our own votes chimed well with the overall vote from the other participating schools, who also voted for these two books.

Whilst we were disappointed not to have had our trip out for the discussion, voting and author talk from last year’s award winner, Francis Hardinge, everyone agreed that it had been a fun morning.  We still hope to see Francis Hardinge talk later in the year and we will let students and parents know more about that nearer the time. 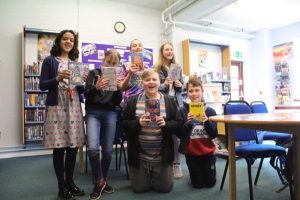