On Wednesday 27 November, pupils from I & II Group (Years 7 & 8) headed off to Queenswood School for this year’s Kids’ Lit Quiz!

The Kid’s Lit Quiz is an annual celebration of reading and all things children’s books, so it is a fabulous opportunity for book lovers to challenge themselves and show off their knowledge. It’s an international competition, with the world final taking place next year in New Zealand. We were taking part in the North London regional heat, with the winners going through to the national final in London next week.

St Chris fielded two teams of four students: Chloe, Vincent, Aubert and Thomas (Team One); Daniel, Sammy, Jonah and Anya (Team Two).  Ten rounds with ten questions. Teams must decide which round to play their joker on and double the score for that round, so it’s always a bit of a gamble.

Most teams, including both of ours, chose to double-up on round 6 – ‘Superheroes’ – and sure enough, there were some high scores in this round as you would expect in a room full of experts! Some round titles were much harder to decipher – ‘Cutlery’ anyone? ‘Teachers’ was slightly more understandable (and yes, there was a question about Miss Honey), but ‘Squirrels’? Altogether more baffling. Thomas also won a cash spot-prize by being first to answer an inter-round question about a character from E.B. White’s classic tale ‘Charlotte’s Web.’

Did we win? No. Did it matter? No!  Our teams worked together to achieve very respectable scores on all the rounds with great enthusiasm and enjoyment.   Looking forward to next year’s competition already ….! 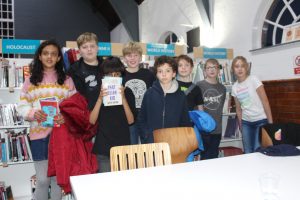