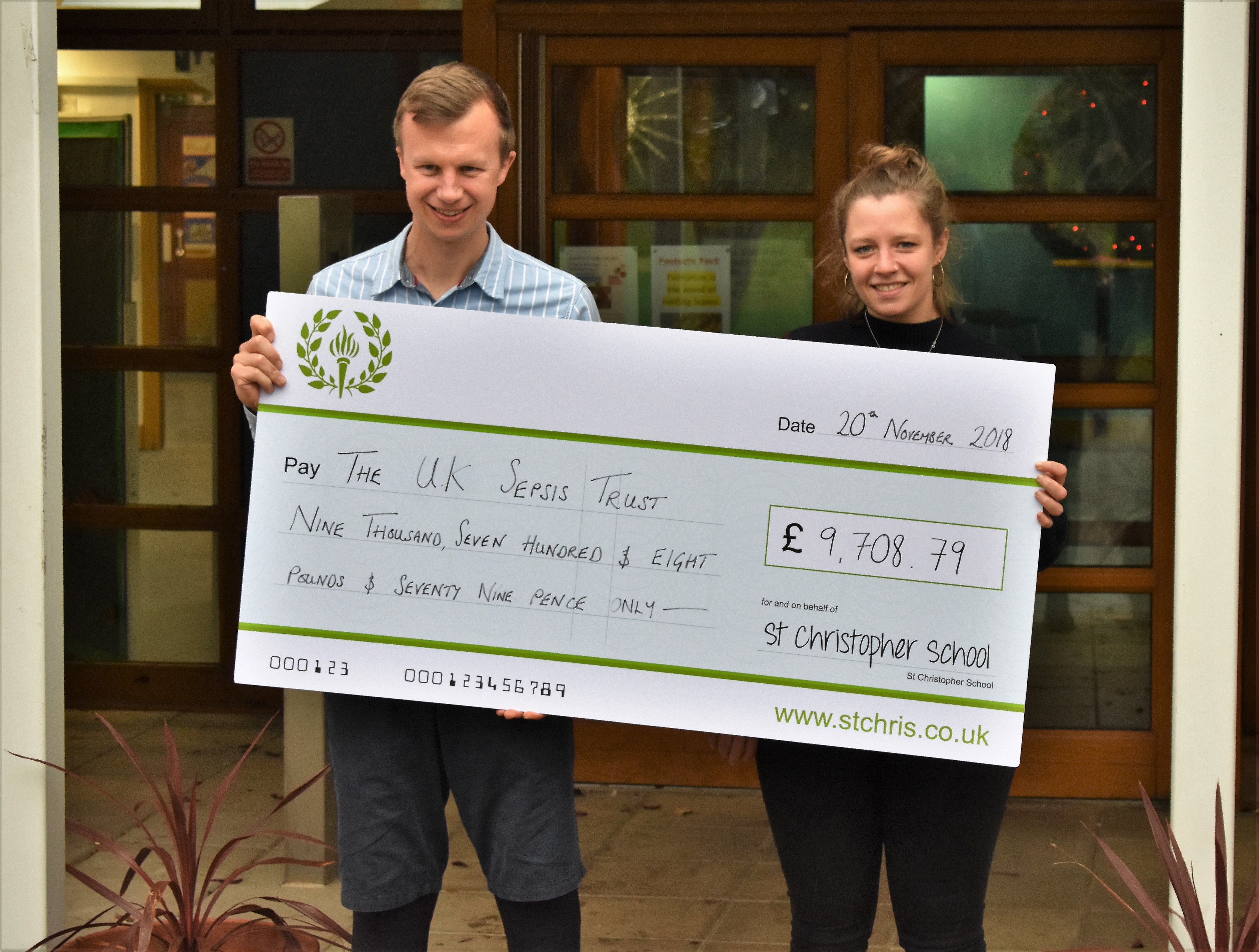 Parents with children at St Chris have raised £9,708.79 for the UK Sepsis Trust, and today handed over a cheque to the charity.

The money was raised through an auction at the School’s annual Charity Summer Ball in July after parents Philip and Hannah Fielding nominated the charity, who supported them after Philip developed sepsis, a serious and potentially life threatening complication of an infection.

Over the Easter weekend of 2016, St Christopher School parent Philip, then 34, felt increasingly unwell with flu-like symptoms. By Easter Sunday he felt so ill, short of breath and aching all over, that he went to an out of hours GP who sent him straight to the Lister Hospital A&E department.

By the time his wife, Hannah, arrived at the hospital, Philip was covered in a rash and struggling to breathe. Within hours he was placed in an induced coma suffering from septic shock and multi-organ failure. Over the course of the night, Philip’s condition worsened and the medical team battled to keep him alive.

Philip’s condition continued to deteriorate and his family were delivered the devastating news that he was not expected to survive much longer. With very few treatment options left and little to lose, the medical team decided to attempt a chest drain, an extremely risky and difficult procedure in Philip’s condition. Incredibly, the chest drain was successful and from that point onwards, Philip started to rally.

Philip was in a coma for two weeks and, as he began to regain consciousness, doctors told his wife that, as Philip had lost the blood supply to his extremities, it was likely that he would lose at least his feet, some of his fingers and that there was a chance he could be brain damaged. In the end, after almost six months in hospital, Philip lost his legs but thankfully did not suffer any long-lasting brain damage.

Philip was described by his rehabilitation team as the ‘perfect candidate’ for a good recovery as he was hard working, motivated and remained optimistic. It wasn’t long before Philip was walking on prosthetic legs and soon returned to the heart of family life and work. He is now a keen wheelchair tennis player, competing nationally and abroad and was accepted onto the Team GB Paralympic wheelchair tennis development squad.

The UK Sepsis Trust is a charity close to the hearts of Philip and Hannah. Philip said: “The UK Sepsis Trust is doing an amazing job at raising sepsis awareness both in the public and within the medical profession. They hold regular support groups all over the country for people, like us, affected by sepsis and these have been an important part of my recovery. We are extremely grateful to the Parents’ Circle at St Chris for choosing to support the charity and to each and every parent and member of staff who donated so generously.”

He continued: “The Charity Summer Ball was a wonderful night which also gave me the opportunity to personally thank the school community for the love, support and stability they provided for my children and wife over such a difficult period in our lives. We hope that by supporting the work of the UK Sepsis Trust we can help prevent other families from being affected by this devastating condition.”

Head of St Christopher School, Richard Palmer said: Head of St Christopher School, Richard Palmer said: “We were delighted to support Philip and Hannah in raising this impressive donation to the UK Sepsis Trust. It’s a clear example of a community coming together to rally around people that they care about and contribute to a cause that makes a real impact on people’s lives, when they are coping with the often devastating consequences of sepsis. Thank you to all our parents who were so generous, and to our Parents’ Circle for organising such a fantastic event.”

The UK Sepsis Trust is a charity dedicated to ending preventable deaths from sepsis and improving outcomes for sepsis survivors. They work to raise awareness of sepsis among the public and health care professionals; encourage early diagnosis; lobby politicians to improve standards of care; and provide better support for sepsis survivors